“Unless the world learns the lessons these pictures teach, night will fall... but by God’s grace, we who live will learn”

Shown recently at the Documentary Film Festival DOCVILLE in Leuven, Night Will Fall, directed by Andre Singer, is a chronicle about the 1945 documentary German Concentration Camps Factual Survey, while adding recent interviews with survivors and liberators. Most part of the 1945 documentary was created by using the footage from the British, Soviet, and American soldiers who liberated the major concentration camps, like the Bergen-Belsen, Dachau, Auschwitz, and Majdanek. The 1945 documentary project was initiated by Sidney Bernstein, who was asked by the British Ministry of Information to document the crimes of the Nazis at their concentration camps, as a historical record and a lesson for all mankind. Alfred Hitchcock was asked to advise and supervise on the structure. After production was initiated, the British government decided not to show the film as its priorities changed rather quickly after the war.

We see the film today thanks to a team of researchers who have decided to finalise the original documentary by being faithful to the initial producers, directors, and cameramen involved, while reflecting both on the process of what it means to make such a documentary and also on the political decisions related to such an enterprise. Besides the additional aim of reflecting on the process of the making of the documentary, the other two original aims of the original documentary remain central: historical record and lesson for humanity.

While parts of the film and footage have already been used in the Nuremberg trials, the worth of historical record remains undisputed, both as we still hear faint but obstinate echoes of denial, and especially as the generation of survivors is now slowly dying out. Besides the worth of historical record, what does it mean to watch this documentary today, exactly 70 years later: what lesson for humanity?

Several times in the documentary beautiful countryside, well-stocked farms, lovely mountains, healthy and rosy-cheeked people are shown to have lived side by side with the concentration camps, apathetic and aloof. Within the camps instead, piles of bodies, remnant, worthless, throwaway, naked, skeletal, disease-ridden bodies, and the smell of death ruling supreme.

The documentary remains on several levels extremely faithful to the idea of the eye seeing what it needs to see. As if after we will see we will know. Once we’ve seen, our lessons will be drawn.

For example, in the first days of the liberation, we see groups of German people being brought at the camps in order to be shamed, for them to see with their own eyes what had happened. What did they see and how did they care then after seeing what they saw? What did the seeing added to the knowing? The killers certainly saw what they were doing, and they kept on doing it. So maybe the revolting of the senses we are expecting does not start and end at the senses.

The reactions from the audience during the screening I attended were hard to discern, some people probably shedding quietly tears, some frozen and speechless, and some turning the gaze away, either because unable to see, or because they had seen enough. Clearly the capacity to shock of any visual representation of suffering has today lost the power it had at the time the documentary was intended to be shown, because there is an overabundance of image and the representation of suffering has become a cliché. Speaking of my own reaction, I realized that although I had never seen any version of the documentary before, in my mind I had seen it all already. Only reading Primo Levi’s “If this is a man” had certainly shown me more than my eyes saw that evening. Nevertheless the documentary stayed with me, not so much for its images as for its faith and hope in all of us getting the lessons. I sensed that invitation like an imperative and I could not refuse it. 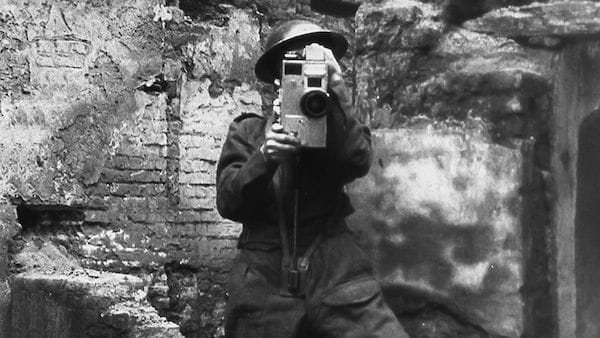 I have tried hard to think on the lessons, not only at the aftermath of that evening in which I saw the documentary but since I have any memory of myself having been aware of Nazism. I often catch myself being highly paranoiac on its return, sensing it particularly close by, feeling haunted by it, and this doesn’t happen when I walk on a Jewish quarter, or when I see a Neo-Nazi passing by, but when I catch the gaze of a citizen passing by a Roma woman, a homeless, a smoker, when I sense in the environment the fear of a virus and contagion, when everyone around me is speaking of health and smelling extremely clean, when I see how the death of immigrants at the Mediterranean becomes a sad but light subject over lunch time to show ourselves at the top of the world, and then I hear a but…they are too many and our islands are drowning, when I feel how the wealth of a human being sharply makes him another human from the ones I consider so, and how I sense that probably this feeling is reciprocal.

I do not want to suggest any similarity between what I’m describing here and what happened in the concentration camp, nevertheless I think I’m trying to suggest that despite of where we are coming from, despite our age, we can sometimes faintly and sometimes sharply, sometimes often and sometimes rarely know and recognize the face of ‘the monster that stalks us not only from behind but also from our future’.

The quote above belongs to Roberto Esposito, in the essay ‘Nazism and us’ in Terms of the Political (2013, original in Italian in 2008). I would like in fact to use him as a companion on the ‘lessons’ to draw, together with Judith Butler and Michel Foucault. Both in Precarious Life (2004) and in Frames of War (2009), Butler has argued that what happens in atrocities of this kind is a lack of identification with the other, a lack of recognition of their humanity. In no moment do the killers put themselves in the place of the victims, whether dead or alive, whether one or millions. For her the question of what it means to become ethically responsive, to consider and attend to the suffering of others, which frames permit the representability of the human and which not, remains central. Such frames manage and form populations, while distinguishing lives to be preserved and lives to be dispensable and disposable. Numbers for example count, Butler argues, but this is not the same as understanding how and whether a life counts. We may imagine, she says, that no frame or matrix is needed through which to know facts, and that knowing them would lead immediately to outrage, but numbers do not, and for that fact, nothing speaks for itself.

The question of whether a life counts. Michel Foucault has extensively written about the modern overlapping of politics with life in terms of biopolitics, which makes the preservation of human life the primary objective of political action. In ‘Society must be defended’, he writes that as soon as power takes up life as its referent object, it becomes possible for power to decide to sacrifice one part of the population to benefit another. Racism, according to Foucault, is what introduces a break into the domain of life that is under the control of power: the break between what must live and what must die. Once the life of a population becomes the ultimate value to defend, the lives of every other race can be sacrificed.

While deeming it one of the most illuminating insights for modernity, Esposito further argues that racism and biopolitics cannot sufficiently explain Nazism, something still remains in the dark. He makes the same observation with regards to the concept of totalitarianism, most usefully from Hannah Arendt’s writings. Comparing Nazism and communism as both totalitarian systems, Esposito writes “If communism has history as its transcendental, class as its subject, and economy as its lexicon, Nazism has life as its transcendental, race as its subject and biology as its lexicon” (Terms of the Political, 80). Accordingly, for Esposito, to understand Nazism, the notion of biopolitics must be merged with the category of immunization. Immunization refers to attempts made to draw a mark between normal and pathological, and do everything possible in order to avoid contagion. Referring to the repertoire used for the Jews by the Nazi propaganda as ‘bacilli’, ‘bacteria’, ‘viruses’, ‘parasites’, and ‘microbes’, Esposito says ‘a loaded metaphor took shape’ (85). Nothing then but extermination could be the answer.

Esposito refers to the obsessive attention shown to cleanliness and public health. Hitler himself detested smoking, was a vegetarian, an animal lover, and extremely attentive to hygiene. For him in fact, says Esposito, anti-Semitism was not considered an ideological question but one of hygiene. Therefore, ‘healing and murder, two sides of the same project, which made one the necessary condition of the other’ (84). As Esposito ironically puts it ‘at Dachau, while the chimney smoked, organic honey was being produced’ (83).

The documentary Night Will Fall is being shown “in the hope that scenes like these will never be forgotten, or repeated”, and it ends with both a warning and hope: “Unless the world learns the lessons these pictures teach, night will fall… but by God’s grace, we who live will learn”. Maybe we have created antibodies, says Esposito, but nevertheless, there is for him no shortcut from hope to the lessons. I think his conclusion of ‘Nazism and us’ is a good place to start at.

A glance at the panorama that inaugurates the beginning of the 21st century is enough to give us a striking picture: from the explosion of biological terrorism to the preventative war that attempts to it on its own terrain, from ethnic-that is, biological- massacres to the mass migrations that swept away the barriers that are intended to contain them, from technologies that invest not only individual bodies but also the traits of the species to pharmacology that modifies our vital behaviours, from environmental politics to the explosion of new epidemics, from the reopening of the concentration camps in different areas of the world to the blurring of the juridical distinction between norm and exception-all of this while everywhere a new and potentially devastating immunitary syndrome breaks out once again, uncontrollably. As we’ve said, none of this replicates what happened from 1933 to 1945. But nothing is entirely external to the questions of life an death that were posed then. To say that we are, now more than ever, on the reverse side of Nazism means that it isn’t possible to rid ourselves of it by simply averting our gaze. To truly overturn it, to throw it back into the hell whence it came, we must consciously cross through the darkness once again and respond quite differently to the same questions that gave rise to it. [p.87]

Judith Butler (2009). Frames of War: When is Life Grieavable? Verso.

On the endless need for the re-securitisation of state security. The so-called ‘Copenhagen school’ of security studies has stirred the waters of international relations theory, and perhaps of social sciences ⋙

The Shakesperian villain reincarnates in Congressmen Underwood in the tv series "House of Cards". Series are more and more the best we can expect in the solitude of our well ⋙