How We Can Learn to Stop Worrying and Love the Peripheries.

Peripheralizing Europe (“an east/south encounter of translocal politics and practices”) is the title of a meeting that has taken place between July 30th and August 2nd 2015 near Kaunas/Lithuania. Activists,researchers, and cultural workers from Europe’s Eastern and Southern peripheries gathered to share knowledges, tell of experiences and map out the current situations at the margins of a continent in crisis. Peripheralizing Europe aimed at re-considering the value of the periphery, not just for the reproduction of the centre but also a key site for the articulation of struggles and counterhegemonic practices. The meeting has been organised by LeftEast (online platform across post-socialist countries), Murmurae (Barcelona-based platform for research and participatory methodologies), Egzilis (Kaunas Anarchist Collective) and the manor house of Žeimiai. In the wake of the meeting, the Peripheralizing Europe organizing group and some participants drafted a statement that Security Praxis is happy to re-post below.

Between July 30th and August 2nd, activists, researchers and cultural workers from across the Eastern and Southern European peripheries gathered in Žeimiai, Lithuania to discuss the current political situations and organizational practices within the European Peripheries. Around 40 people participated in this meeting based in 20 different countries, mostly on the EU periphery. Organised by Murmurae (transdisciplinary facilitation platform, ES), Egzilis (anarchist collective, LT), and LeftEast (online platform across post-socialist countries), this meeting brought together people from as many places as political backgrounds and ages.

We mapped our respective contexts, stakes, and strategies of our collectives and organisations through which resilient social movements are emerging. We worked through differences and commonalities of the Southern and Eastern peripheries, in order to build a shared analysis, conceptual framework and horizon for struggle. Our starting points were mutual recognition and support. The transversality of the meeting succeeded in producing a resonant space of listening, care, generosity and critical solidarity. This created the possibilities of further engagements, actions and micro-political analysis. 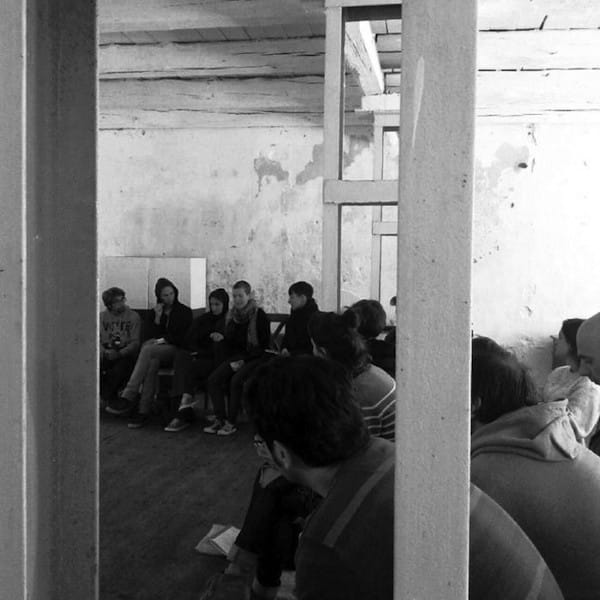 The peripheries continue to absorb the most brutal effects of the crisis of Europe. Europe’s margins are burning, not just with rapid declassing (PIIGS – Portugal, Italy, Ireland, Greece, Spain) and normalized poverty (the East) but also with people trying to cross minefields and seas and jump walls and fences, fleeing from, most often, the effects of western imperial and neo-colonial policies.

We call peripheralization the process of production of margins via subjection to a centre. It implies turning places and regions into reproductive spaces for the centre. In our countries, in the last 40 years, it has meant the destruction of welfare; the creation of highly exploitable, migratory work forces; the destruction of peripheral territories’ capacity to withdraw from integration into neoliberalism; and the attempt to make them competitive through the dumping of wages, taxes and social rights.

Our call to peripheralize Europe in turn points to the possibility of departing from that reproductive space and its knowledges in order to subvert existing power relations. To peripheralize Europe means to reject the developmentalist gaze according to which the centre is the future of the periphery. It means to recognize that the periphery is central, and to build struggles and resilience starting from the knowledges, practices and networks of the margins. It means to recognize that the center also has its own internal peripheries with regions and social groups that remain subjected to the same logic of marginalization, and in which we recognize ourselves.

To make this a reality, we identified a series of key tasks and processes. Starting from the Eastern and Southern peripheries, we must continue to:

In this essay I reflect on the notion of ‘human capital’, steered by the latest Paolo Virzi’s movie with the same tittle, and its implications on our subjectivity, relying ⋙