In this essay I reflect on the notion of ‘human capital’, steered by the latest Paolo Virzi’s movie with the same tittle, and its implications on our subjectivity, relying mainly on the analysis of neoliberalism started by Michel Foucault in his lectures on the Birth of Biopolitics. In a world where every action makes sense only in terms of cost and benefit, what is crime and what is punishment? And what are we?

Based on Stephen Amidon’s novel set in Connecticut, the movie Human Capital, directed by Paolo Virzi, relocates to northern Italy, the wealthy region of Brianza near Milan, during the financial crisis of 2010, and is directed in a fusion of a thriller mystery, black humor, and social critique of capitalist malaise of contemporary society. It revolves around two families whose destinies are tied together by a road accident, involving a worker who becomes a hit-and-run victim while biking home. Told in four “chapters,” each focusing on a different character, the film through the device of filming the same scene from different points of view, revisits the night of a school ceremony, when the Ossola family, struggling middle-classers are invited to the VIP table of the elegant capitalist Giovanni Bernaschi. Dino Ossola, is an embarrassing and naive social climber with a pushy personality who mortgages the house to buy into the Bernaschi family hedge fund, while his wife Roberta is pregnant with twins. Serena, his daughter, attending the same school as the Bernaschi’s son Massimiliano (the two initially dating), remains unimpressed by the fortune of the Bernaschis, showing instead an interest in a troubled artist Luca. Carla, the trophy wife of Giovanni, is a fragile, clueless, and unhappy woman who once had aspirations of becoming an actress.

I do not bring here further details on the plot and the scenario (recommending the film for the audience), but I would like instead to take up a critique based on the notion of human capital, that the film brings forward as a provocation. Regardless of the main message that the lives of ‘little people’ are disposable when ‘Power with big P’ is threatened, the film is more than a class critique, its messages being more subtle and worrying than the message the ‘rich get richer and the poor get prison’, which remains undisputable anyway. Alongside its clear depiction of social inequality, Virzi explores the unhappiness of rich and poor alike in a society that measures a person’s value in terms of money, and I thought this was worth dwelling into, the implications of Virzi’s subtle message for our subjectivity (self-formation).

The title of both movie and novel ‘human capital’ come from a term that economists and actuaries use to assess the value of knowledge and other skills in creating wealth, collectively or individually. Insurance companies have an algorithm to calculate our value in money. ‘Human capital’ designates an accident victim’s net worth in compensation claims from life insurance companies. Therefore, it must sound absurd, but indeed, one life is not worth another and we have here the full application of this idea in economic forms: the translation of life into capital that can be invested and profited from. Insurers extract value from the life-course and life-potential of their clients, transforming them into investment capital. To do that, insurers require a knowledge base that informs them on what to expect from life, from life processes, life-courses and lifestyles.

But how does a worker become human capital, a capitalist human? The most striking analysis of neoliberalism and its impacts on our subjectivity has been offered by Michel Foucault during his lecture at the College de France on the Birth of Biopolitics. Whereas according to the Marxist conception labor was a field of exploitation characterised by the opposition of “worker” and “capitalist”, for the classical liberal conception, homo economicus, was a partner in the process of exchange, property and ownership being its main semantics. According to Foucault, it is important to understand the changing rationalities and technologies of neoliberalism from earlier forms of liberalism. The main difference is that although the subject of both is homo economicus, in neoliberal terms he is an entrepreneur of himself and not a partner in exchange. The idea of human capital serves precisely to close the difference between labor and capital and does away with social antagonism, by constructing a society in which everybody is a capitalist, an entrepreneur of himself, creating thus a sort of ‘equal unequality’. Individuals must make investments in different aspects of their lives and be able to calculate costs, risks and possible returns on the (human) capital invested.

The other central difference lies in the amount of regulation the two forms of liberalism demand. The core of the neoliberal society is not the laissez-faire where the state and the market keep their distance, but a concurrential mechanism based on entrepreneurship. Therefore the government has to regulate (and law and punishment become central technologies here) the fragile structure of concurrence, intervening on the social tissue for this mechanism to flourish. It proposes thus a constant intervention from the state on the conditions of possibility of the market, not on the market itself.

Furthermore, neoliberalism forms a comprehensive schema for understanding social reality: all rational conduct, whatever it may be, ultimately comes under economic analysis. It subordinates all aspects of human existence to the free market, instilling an ‘enterprise culture’ in all aspects of social life. The most shocking example Foucault gives is the mother-child relationship, where a neoliberal economic analysis would treat the time the mother spends with the child, as well as the quality of the care she gives, as an investment that constitutes human capital and on which she can expect a return. Individuals thus must make constant investments in all aspects of their lives and acquire sufficient economic knowledge to be able to calculate costs, risks and possible returns on the capital invested. Every action therefore- crime, marriage, education, love- can be framed as an investment and calculated in terms of cost and benefit. For example, crime for Foucault becomes “any action that makes the individual run the risk of being condemned by a penalty (Foucault, BB, 251).

Neoliberalism has therefore no outside. It encounters no tension, as all is governed according to the same logic of interest and competition. Reflecting on its political implications Wendy Brown in Edgework (2005) refers to the idea of ‘privatization all the way down’, which encapsulates from the privatization of public sector to privatization of all problems. She shows examples of how individuals opt out instead of addressing political problems, for example creating gated communities, sending children to private schools. As a rational calculating entrepreneur, the neoliberal citizen is therefore one that strategizes for her or himself among various social, political, and economic options, not one who strives with others to alter or organize these options, who obeys rules, and pursues common goods.

Thinking on social actions, the implications of this are radical. The neoliberal approach to dealing with poverty, unemployment, and homelessness is neither to ignore nor to alleviate them, but either to exploit them for investment or punish them (for example obvious in the upcoming notion of a mismanaged life, or criminalization of homelessness). Criminologist and sociologist, Loic Wacquant in Les prisons de la misère (1999) has argued that there is a tendency towards the ‘expansion of the penal treatment of misery’, whereby punishment plays the function of a ‘social vacuum cleaner’ that cleanses the streets of the ‘human waste’, a term employed by Bauman in Wasted Lives (2004). Bauman suggests that penal systems play a growing role in absorbing those people that are no longer able to participate in a highly competitive society of consumers. By doing this it also reaffirms state authority in the limited domain (law-and-order) that it still holds for itself after its retreat from social provision and economic regulation. In 1992, Feeley and Simon had introduced the features of what they had termed The New Penology, which they argued was less concerned with responsibility, fault, moral sensibility, diagnosis, or rehabilitation of offenders, than with techniques to identify, classify, and manage group and aggregates (for example drug-users, sex-offenders) sorted by dangerousness. Through the employment of tools such as indicators, prediction tables, population projections its task becomes managerial instead of transformative.

But to go back to the initial arguments on subjectivity, what is especially useful in the Foucauldian analysis of neoliberalism, is that he urges us to take seriously the manner in which the fundamental understanding of individuals as governed by interest and competition is not just an ideology that can be refused, but it is an intimate part of how our lives and subjectivity are structured. The implication of this is that any political response to neoliberalism must meet it on its own terrain, that of the production of subjectivity, freedom and possibility. Foucault had investigated several forms of resistance and critique to counteract the ways we are governed. For him critique was the art of not being governed like that and at that cost. This would come in three steps, where the first one is a good understanding of the forces and rationalities that have constituted us, the second one is a disengagement with the rationalities that have pushed us towards a certain subjectivity, and the third one is a reengagement with new forms of subjectivity and living. It is important to understand that these three steps can only be understood and take place together. Without the first step of knowledge for example, resistance becomes a naïve ‘no’, and refashioning of oneself becomes a cheap ‘you can be all you want to be’ which is exactly what Foucault had warn us against. He has spent the last years of his life to try and answer these questions. For him the revolution either will be ethical or it will never be. But it will not be easy.

Malcolm M. Feeley and Jonathan Simon (1992). The New Penology: Notes on the Emerging Strategy of Corrections and Its Implications, 30 Criminology 449. 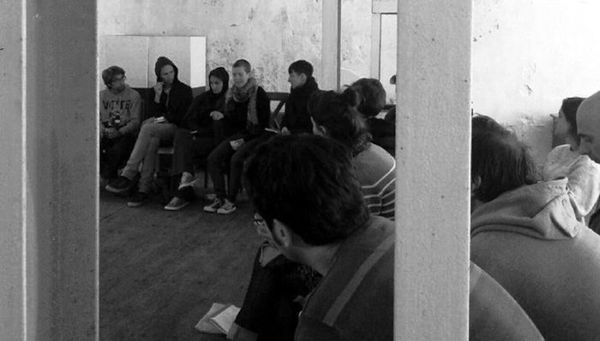 How We Can Learn to Stop Worrying and Love the Peripheries. Peripheralizing Europe (“an east/south encounter of translocal politics and practices”) is the title of a meeting that has ⋙

On traveling with a Kosovo passport in the European Union gated community. In visa application procedures, I have no identity. My identity is my passport and my passport is my ⋙