How seven Norwegian small warships ended up in the hands of a former Niger Delta militant.

Norway is rarely an issue of debate in Nigeria, but on Sunday 14th December 2014, every major online newspaper in the country published articles about the sale of Norwegian warships to a security company controlled by a former Niger Delta militant. The main issues raised was not only why Norway had sold seven warships to former Niger Delta militant, but equally important what consequences this would have for the tense and possibly violent elections 14th February next year.

The events that lead to this sale started when the MEND rebellion in the Niger Delta was brought to a halt by the Amnesty Programme in 2009. One of the main Niger Delta militants that took advantage of the Amnesty Programme was Government ʻTompoloʼ Ekpemupolo. As not only a former MEND commander, but also a man with political connections to the Niger Delta elite of the ruling party People’s Democratic Party (PDP) Tompolo was one of a select group of former militants who was rewarded by Goodluck Jonathan’s government with handsome public contracts. In the case of Tompolo this enabled him to establish a private security firm, Global West Vessels Specialist. This company has been awarded several contracts possible worth millions of dollar to provide Nigeria with additional coast guard capacity. Among other things Tompolo’s firm is supposed to fight piracy and collect revenue along the Nigerian coast as well as provide the Nigerian Navy with ships and stationary equipments. The exact amount of money that these contracts are worth as well as the nature of the relationship between Tompolo’s private company and the Nigerian Navy are, however, currently not very clear. In Nigeria, there are those that fear that what this means is that Jonathan has outsourced the whole national coast guard service to a private company owned and controlled by one of his trusted henchmen in the Niger Delta, whereas at least official spokes persons from the Nigerian Navy claim that these are just service contracts and therefore does not entail any encroachment on Nigerian sovereignty. This is undoubtedly an issue that will continue to be intensely debated as Nigeria moves forward towards the general elections next year.

However, what these contracts also meant was that Tompolo and his company needed military equipment suitable for operations in the Niger Delta such as the Norwegian missile-torpedo boats (MTBs). It is at this stage of the story that Norway and the Norwegian Navy enters the game. During the last couple of years, the Norwegian Navy has upgraded a considerable part of its military hardware. Among other things, this meant that several MTBs and some large support boats had been taken out of service, and where therefore to be sold. Norway who like to present itself as a country with a ethical foreign policy has mechanisms supposed to control such sales in both the Ministry of Defence and the Ministry of Foreign Affairs, but in this case they have obviously not worked very well.

The responsibility for the concrete details of such sales rests with several decentralised units (the FLO units) in the Norwegian military establishment. Their task is to buy and sell equipment as cost-efficient as possible. This means that when it comes to sale of old military equipment this is supposed to be sold of as quickly as possible to the best price available. Thus, in the FLO-units best practice basically means rapid turnover as unused military equipment simply just means unachieved capital gains.

In brief, what happened is therefore the following (for those interested and with a certain knowledge of the Norwegian language please see a series of articles about the sale of these boats by the Kristoffer Egeberg in Dagbladet, http://www.dagbladet.no).

The FLO-unit responsible for this particular sale searched for potential buyers and found one. This was the security company CAS Global with a business address in the UK. As the FLO-unit tasked with this sale must have understood it; this was ʻdeal doneʼ as export of such ships to the UK was in accordance with Norwegian law and control procedure for such type of sale. If the boats had been sold directly to Nigeria this would have been a completely other matter and the control organs of both the Ministry of Defence and the Ministry of Foreign Affairs would have been brought in to assess not only the deal itself, but also the buyer and the political situation. Most likely such a sale would never have taken place, but as the buyer was registered with an office in the UK, the FLO-unit and the Ministry of Defence did not see any reason to investigate the matter further and the sale went through. Undoubtedly naïve and silly as it did not take the above-mentioned journalist much time to reveal that CAS Global only has a post box address in the UK, but offices in several other countries, Nigeria included.

What actually has happened in this case is still not clear. There are talks about an inquiry in the Norwegian Parliament. However, as neither the current government in power nor the main opposition parties has much to gain from this as any political blame for this must be equally shared between them as the sale started when the previous government was in power and was completed under the current one, it remains to be seen what will come out of such an inquiry. Hopefully, some lessons has been learned concerning such sales. The single most important one being that any sale of such material must involve an end-user declaration as this is the only guarantee against what has happened here. It is simply too easy to blame the UK as some Norwegian politicians has done.

Thus, whereas this sale may also have further ramifications in Norway, the more serious ones are most likely to emerge in Nigeria. The sale of these boats, the rising power of Tompolo, his relationship to President Goodluck Jonathan, and what the increasing military might of Tompolo’s private security company means for further peace and stability in Niger Delta will not only become an important part of the political debate in Nigeria as the country moves towards the next general election, but may also give us some cues about the post-election landscape. The out-sourcing of military capacity to a private company may not mean that sources connected to the current president is preparing for war in the case of election defeat as some Nigerian newspapers claim, but it would certainly entail that any new incoming president quickly will have to negotiate a settlement with actors such as Tompolo in order to avoid new unrest in the Delta, and with the ships he has received from Norway, Tompolo is in a position to make such strong claims. This was not what the Norwegian Navy intended when it started the process of selling these boats, but it just shows how complicated such sales may be and the great care one needs to take if one are to sell such equipment.

Morten Bøås is Research Professor at the Norwegian Institute of International Affairs (NUPI). Email: mob [at] nupi [dot] no

The resurrection of classical Western movies stereotypes as a grotesque Iraqi tale. Why do enemies look all the same? Why do they wear the same clothes, use the same weapons, ⋙ 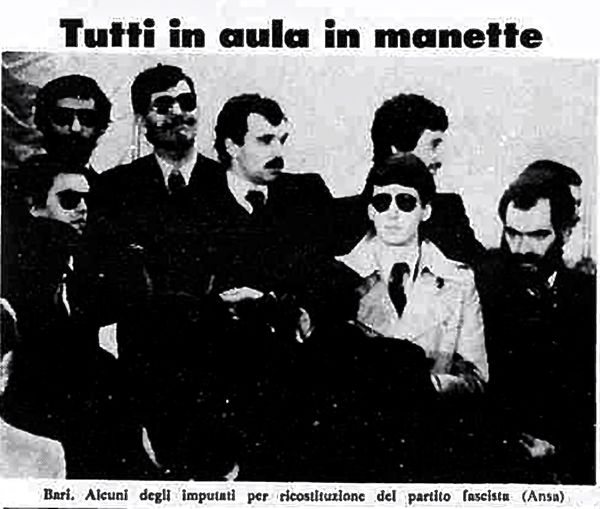 An unprecedented probe shows that the città eterna has been shadow-governed for years by a clique of neofascists and mafiosi, and that it may not be willing to understand why. ⋙