What are the connections between scholarly knowledge production on security on the one hand and security expertise, policy-making and practices on the other? Under what conditions can scholars assume that they can create an impact on ‘real-world practices’ rather than simply engaging in ‘policy-based evidence making’? What are the possibilities and constraints of collaboration? These and related questions were discussed on a one-day BISA Research Workshop under the title Security Theory, Expertise and Practice: Past Experiences and New Approaches to Collaboration. Workshop participants shared the common understanding that, rather than producing research in a linear and extractive manner about certain actors and organisations, it can be beneficial to do so in a systematic collaboration with them, so as to ensure that findings are useful, that they have a chance to produce ‘real-world’ effects, and to benefit from other synergies. In this post, we outline the key conclusions from this discussion and develop a critical perspective on the potentials but also limits of cooperative research in security, peace and conflict research in IR and the social sciences more broadly.

Recent debates on knowledge production in peace, conflict, and intervention studies and critical contributions on international practice theory have offered key insights into the knowledge-policy nexus and the way in which collaborative research projects in particular, but also academic inquiry more generally, can be shaped and preconceived by the boundaries and knowledge regimes created by the neoliberal political economy. In the introduction to their special section on ‘Knowledge Production in Conflict and Intervention’, Bliesemann de Guevara and Kostic point out that the ‘neoliberal marketplace of ideas’ nowadays not only shapes preferences for research designs and methodologies, but also determines ‘what is seen as research-worthy’ in the first place. Especially when researchers are commissioned to carry out research with major partners such as development organisations and governments, Nic Cheeseman and Susan Dodsworth point out that this can entail major pitfalls about how and if at all critical perspectives on these partners’ actions are to be included in final project outputs.

Against this critical backdrop, the workshop explored the practical, ethical, and normative implications of such cooperation, revolving around three key questions: how, with and for whom should one cooperate in research? Which possibilities are there for engagement and critique? what are the institutional and infrastructural preconditions for generating impact? 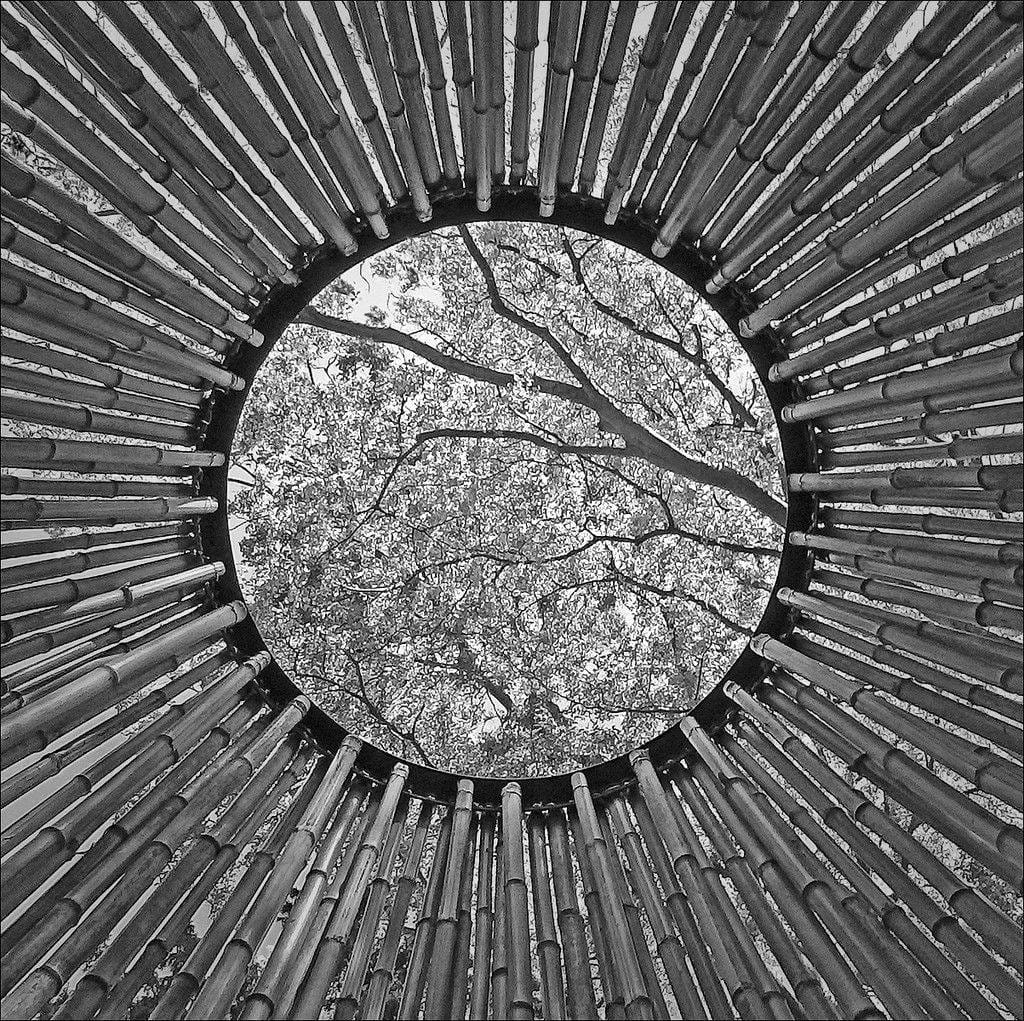 1. Cooperative research: how, with and for whom?

Karolina Kluczewska (University of St Andrews) presented her action research project on the processes of translation that Tajik NGOs engage in to somehow match the language of donors such as USAID on good governance with the — not always compatible — agendas of the Tajik government. Philipp Lottholz (University of Reading) followed up with a presentation on his collaboration with a NGO network promoting more accountable and transparent approaches to reforming the police in Kyrgyzstan. Daniela Lai’s (LSE) presentation of her cooperative research on peacebuilding and post-war justice in Prijedor and Zenica (Bosnia and Herzegovina) provided further insights and comparison to the first two presentations on activist research with grassroots and civil society organisations. While these three projects embraced a positioning of solidarity with, if not activism for, the respective partner organisations, Anna Kreikemeyer (IFSH Hamburg) introduced an initiative called Eurasian Peace Studies Exchange, which is geared at exchanging existing conceptions in peace, conflict and IR research and works towards common approaches between partners from Norway, Germany, the Caucasus and Central Asia.

Elisa Lopez Lucia’s (ULB & University of Portsmouth) as well as Paul Jackson’s (University of Birmingham) and Mark White’s (First Call Partners) presentations examined cases of cooperation between academia, think tanks and governmental actors from the UK and various African countries; a cooperation landscape that Tony Chafer (University of Portsmouth) analysed with specific view to the differences between Franco- and Anglophone foreign policy. While these are more traditional cases of academics engaging periodically with policy-makers from a position of ‘knowledge’ and ‘expertise’ they have developed in their academic work, Andreas Hirblinger’s (Graduate Institute Geneva) position is more hybrid inasmuch as he works for a research center, the Inclusive Peace & Transition Initiative, which is geared towards providing expertise to policy-makers.

2. Which possibilities for engagement and critique?

Possible roles for researchers in cooperation projects with IOs and governments were discussed in detail. Reflecting on their interaction over more than 15 years, Paul Jackson and Mark White gave the most systematic account of the incompatibilities and synergies of academia and the policy world, which focused on:

Both presenters emphasised that engaging with one another requires good communication and understanding of what each part can offer and is seeking out of the project. Although there are also ‘schizophrenic’ instances where evidence-based recommendations are overridden by higher political agendas (White) that can make researchers refrain from further cooperation, government actors such as UK’s Department for International Development might equally fund long-term studies, as it occurred in the case of Jackson’s co-authored study ‘Security System Transformation in Sierra Leone, (1997-2007)’.

As a critical contrast to these positive experiences, Elisa Lopez Lucia presented her reflections on a recent consultancy for a governance intervention project in an African country. She had found herself having to reconcile competing demands from the donor funding the project, the service provider implementing the project, and other academics with whom she was working. As a result, her access to the donor was limited, and the results of her study were largely censored while being presented as ‘independent’. Echoing Paul and Mark’s presentation, this emphasised the importance of understanding the political economy foregrounding the interests and incentives of the individuals and institutions with whom one engages in such collaboration, and that trust and communication are indeed central.

Karolina Kluczewska and Philipp Lottholz raised concerns about some limits of critique in action research, when researchers actively collaborate with local actors. While action research has the emancipatory aim of equalising relations between the researcher and participants, Karolina remained critical especially towards the fact that her partner NGO engaged with researchers primarily in the hope to attract new funding from donors, not for the sake of collaborative and critical writing, which is of interest for researchers. The difficulties of articulating critical perspectives were also highlighted by Philipp, who had been struggling to determine exactly how much reflection and critique should and could be expressed vis-à-vis his partners. Daniela Lai provided further insight on this issue. Even though she had tried to actively support the organisations she was working with by writing and helping them with public relations work, activists still queried her motivations and the balance of benefits stemming from the research, which may have appeared greater for her (since she was completing a doctorate) than for them. This raises the key question: is critique actually possible in action/activist research, or can such cooperation only work if involved parties confine themselves to diplomatic discussion of criticisms that do not prompt partners to rethink their actions?

Elisa Lopez Lucia emphasised the difficult position of the academic engaging with the policy world, caught between the desire to provide critical and rigorous research to improve policy, and the pressure to understand the constraints and needs of policy-makers. According to Paul and Mark this tension is particularly acute in fragile and post-conflict settings where difficulties in getting evidence should be honestly acknowledged by academics, and accepted by policy-makers. 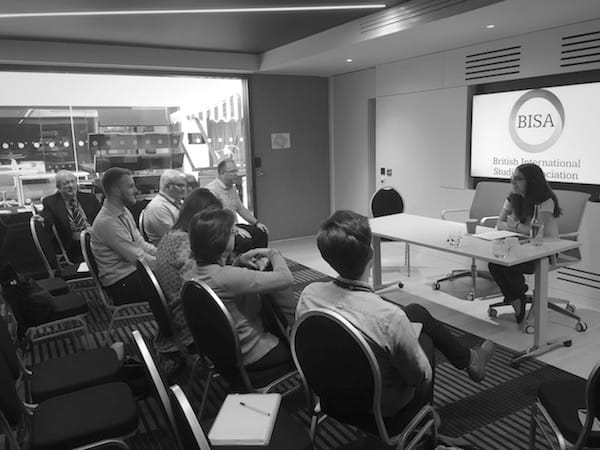 The possibility of engagement also varies with the cultural context. Anna Kreikemeyer underlined the limits of participatory research driven by a liberal understanding of peace in Central Asia where Western peace concepts are seen as disruptive. The constraints of the cultural context were also evidenced by Tony Chafer who pointed out that the French government’s hierarchical approach to policy formation in the areas of peace, security and state-building makes cooperation with scholars even more difficult than is the case for instance in the UK.

More broadly, Andreas Hirblinger’s presentation of his project featuring a citation and authorship network analysis of recent debates in peace and conflict studies and corresponding policy shifts in major international organisations raised questions on academic impact. His preliminary results reveal that it is only very few and very senior researchers who get directly cited in policy literature. Furthermore, the fact that ‘trending concepts’ such as ‘local ownership’ or ‘hybridity’ feature in peer-reviewed journal debates only after they are applied in the policy world raises doubts over researchers’ ability to influence policy and practice. This suggests that a large part of the policy of international organisations is shaped in informal realms that are only accessible in anecdotal form at best. Participants agreed, however, that this should not prevent further inquiry into the nexus and interdependencies between academia and policy.

3. Which institutional and infrastructural preconditions for generating impact?

The final discussion focused on the environment that cooperatively oriented researchers face in higher education. It largely revolved around the relation between the Research Excellence Framework (in the UK) and impact agenda on the one hand and cooperative approaches to research on the other. Daniela Lai raised the important point that this agenda promotes the idea that impact can be maximised by engaging with particular types of policy-makers, like governments, ministries, development and international organisations. However, she argued, such views do not take into account the possibility that informal or grass-root organisations may be equally if not more important for bringing about change. Similarly, Andreas Hirblinger, following on the argument of his presentation pointed to the need to differentiate between policy impact on a general level — often proclaimed in deterministic language in applications or reports — and the impact on individual programmes and projects, where it is easier, and more realistic, to measure.

Participants also discussed an apparent paradox. If impact and public engagement are highly valued by both funders and researchers, cooperative and participatory methodologies and approaches should be much more supported and thus represented in the research landscape. However, this is not entirely the case. While large data sets including information about methods are hard to access, a glimpse into recent funding decisions indicates a marginal role of cooperative and participatory approaches: only two of 26 impact case studies in the ESRC’s 2016-17 Research Performance and Economic Impact Report, and only one in 45 British Academy Postdoctoral Fellowships awarded in 2016 declare to be using participatory methods. This may of course partly be due to the fact that people work in a cooperative manner while not making this the central feature of their work, nor communicating it. The more senior workshop participants agreed that said approaches and methodologies are indeed welcome by funders. A more general observation is that there is not much of a scholarly (or otherwise) debate on cooperative research approaches, nor is the relation between academia, policy and society at large discussed in much detail. It thus seems that continuing the conversation on the usefulness of cooperative, participatory and practice-based approaches to research is worth the effort. The participants’ publications and future research projects will showcase the collaborative philosophy at the heart of the event, and further events are envisaged to continue the debate.

Inline: a snapshot from the BISA workshop, (C) Philipp Lottholz.

For further details see the authors' complete report about the workshop 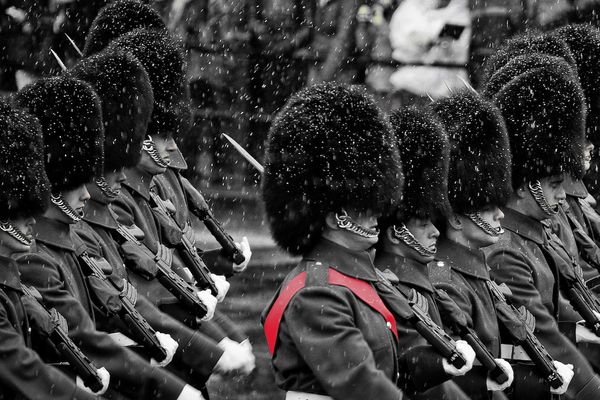 The development and unification of criminology as a discipline, as a distinct terrain of study and knowledge complex has mostly revolved and condensed around two interrelated focuses: 1. legally defined ⋙ 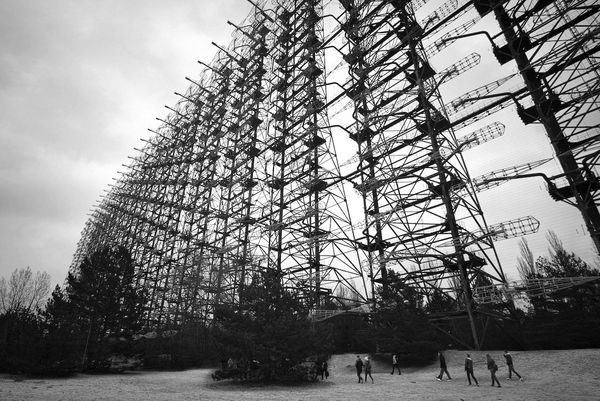 In June 2016, Grégoire Moutaux, a French national, was apprehended at one of the Ukrainian-Polish border crossing points while trying to smuggle 5 AK-pattern assault rifles, thousands of bullets, 2 ⋙