As we reported several months ago on this blog, the first challenge to the illiberal order gradually shaped over the last few years by the Turkish President has been a petition signed by a group of academics – the “one-thousand-one-hundred-twenty-eight” who asked the government to stop its military operations in the Kurdish provinces and to return to peace negotiations with the Kurdish leaders.[1]

This petition triggered a variety of expressions of transnational solidarity among colleagues, a sort of academic cosmopolitanism that has been nourished by scholars’ and students’ mobility as well as by the internationalisation of education and research.[2] We do not know yet whether this will lead to politically-engaged actions, reviving the most authentic form of praxis and intellectuals’ civic commitment across the borders.

“The writers, the journalists, the Kurdish, the Alevites and, of course, the women”:[3] today in Turkey many journals and newspapers have been closed/locked by claiming that they allegedly support PKK/KCK,[4] PYD,[5] and FETO[6] “terrorists”. Right now more than 130 journalists are in jail – a world record. In two months, a total of 170 newspapers, journals, radio and TV have been shut down by state authorities.

Violence against women too has gradually increased since the AKP government came into power. Ece Temelkuran, writer and journalist, says that in Turkey there is an ideal definition of human being which is Turkish, man, Sunni, and conservative. If your identity does not correspond to this definition, you are in danger. As a lawyer, Ece Temelkuran claims that since 1980 the sense of law and justice has been increasingly damaged, exposing to violence particularly women, children, minorities, and nature.

On the 4th of November 2016, early in the morning the police raided the homes and detained the joint leaders of the People’s Democratic Party (HDP) and nine other HDP parliament members.

President Erdoğan believes that he can constitute a cohesive majority in parliament, realizing his dream of presidential system. It is hard to say what kind of system this would be – at the moment, all we know is that Mr Erdoğan calls it Turkish-type presidential system and its most salient characteristic appears to be an unprecedented concentration of power in the hands of the President of the Republic.

The recent wave of repression started with punishing the Academics for Peace for their allegedly unpatriotic attitude.

Since the coup attempt that took place in July, academic repression has increased, while repression expanded to different sectors of the society. Even though the coup has been officially thwarted and democracy supposedly won, the President’s recent statements, discourses and decisions raise doubts about the democratic credentials of the Turkish government in office. One sees repression everywhere: not only towards suspected FETO supporters, the alleged coup orchestrators, but towards every dissenting voice, including the legitimately elected representatives belonging to opposition parties (e.g. members of HDP, a pro-Kurdish leftist party).

After the failed putsch, more than 121,000 civil servants have been expelled from public service, 74,000 detained, and 34,000 arrested. In accordance with the emergency decree laws of July-September 2016,[7] 10,158 people were discharged from their positions; among them there are 2219 from the Ministry of National Education, 2774 from the Ministry of Health, and 1267 from the Higher Education Board (YOK). Expulsion from public service entails three restrictive measures: a) ban from taking up office in public institutions or corporations; b) passport confiscation; c) if deemed necessary, confiscation of private property. Expulsion from a university deprives the academic of the right to submit an associate professorship application, which in Turkey cannot be obtained without an institutional affiliation.

The President uses the state of emergency to silence and eradicate views that are in opposition with the regime and to attack the Turkish system of higher education.

Below you can find a table indicating the number of academics who were dismissed, suspended, detained or forced to resign for signing the peace petition before the coup attempt of 15 July 2016.

Rights violations against “Academics for Peace” 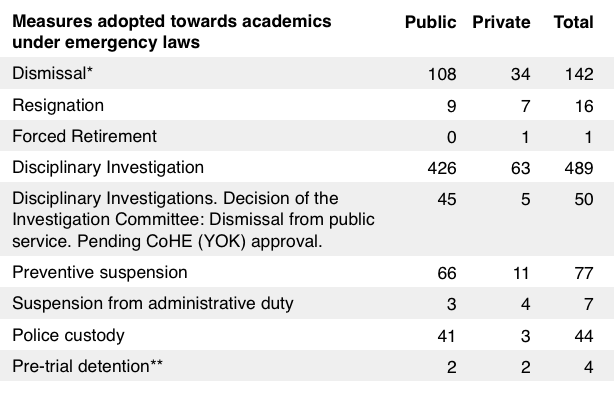 * Among the signatories of the Academics for Peace petition signatories, 83 academics were removed and banned from public service. Also, at least 63 PhD students within the Faculty Training Program suffer from rights violations following the government decrees.

** Three academics had to stay in pre-trial detention for 40 days and one for 22 days until they were released after the first court hearing.

State of Academic freedoms in Turkey

Today in Turkey there are 115 public Universities and 63 private Universities, in total 178 higher education institutions. Almost two thirds of these Universities were opened by the AKP (Justice and Development Party) and by president Tayyip Erdoğan. During the last months, 15 private universities suspected of being linked to the Gulenist movement have been closed down as a consequence of the above-mentioned emergency decree laws, which led to an impressive effort at achieving post-coup purges. Students enrolled in those Universities were displaced to different Universities throughout the country. At the same time, 2,808 academics became unemployed without any public assistance.[8]

Through three legislative decrees (KHK) declared within the State of Emergency, a total of 3850 academics have been dismissed in 107 Universities in post-coup purges. With the legislative decree published on the official gazette on September 2, 2346 academics were dismissed; on October 29, 1262; on November 22, 242.[9] The last decree in particular made explicit that the dismissals were motivated by the accusation of academics supporting FETO and PKK terrorist groups. And it is important to pay attention to the list of targeted academics: many of them had signed the Academics for Peace petition.

A record of expulsions from Istanbul University

Many dismissals targeted the members of the Trade Union of Public Employees of Education and Sciences (Egitim-sen). Deniz Morva, Assistant Professor at the Department of Communication, Istanbul University, claims that he publicly opposed FETO political ideas and finds it ridiculous to be dismissed on the basis of his alleged complicity with FETO. Another scholar from the same university and faculty states that the academics dismissed are simply those who had been struggling for better working conditions.

The weaknesses of scientific and liberal academic environment

Because of this political situation, many academics prefer to leave the country, in particular those facing threats and trials that could lead to long imprisonment. Even some of those who have not been dismissed yet are looking for a position abroad. Repression in Turkish Universities do not let them free to think; in addition to that, they would never be sure whether they can keep their job or not. They feel insecure. They have always to deal with the daily threat of a new decree of expulsions.

Neşe Özgen, who is retired and offers PhD lectures at Galatasaray and Mimar Sinan Universities in Istanbul, decided to move to Greece: not because she could not carry out her research, but rather because she could not bear the burden of violence and repression spreading everywhere around her.

We do not have any data to know how many academics went abroad during the last months or how many are currently preparing for leaving. What we know for sure is that the lessons we can learn from Turkey concern the whole academic world.

The protection of academic freedom is not only a “problematique”, a subject to study from the outside without a clear positionality. It is a political problem, whose responsibility ultimately rests with all scholars living and working in different fields and territories.

**Solidarity with All Academics at Risk ** 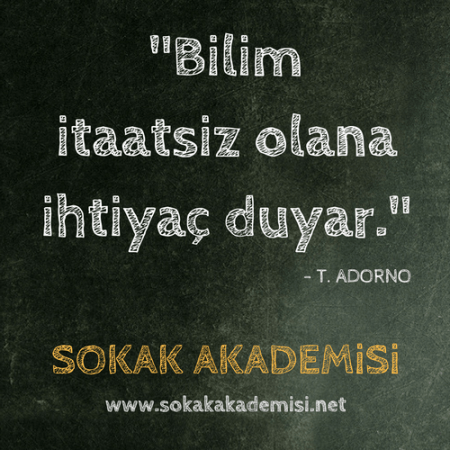 Street Academy. “Science needs those who disobey it”, T. Adorno

Do not Give up the Struggle! Even under the eclipse of reason, opponents never give up the fight against the attacks to academic freedom. If this fight cannot be fought inside universities, then it can lead to the creation of academies outside the institutional spaces; if there is no free campus, then the streets can become your campus. In this spirit, Academies for Solidarity, Praksis Journal and the so-called Haziran Bilim, a group which organizes meetings and seminars, were created. These initiatives are all inspired by solidarity with the academics dismissed from the universities, and aim to support them financially and to create a virtuous system based on the principles of gift economy. The Praksis journal supports academics through the revenues from its sale; the group of Academics for Peace, instead, established a solidarity fund for the economic support of dismissed academics. 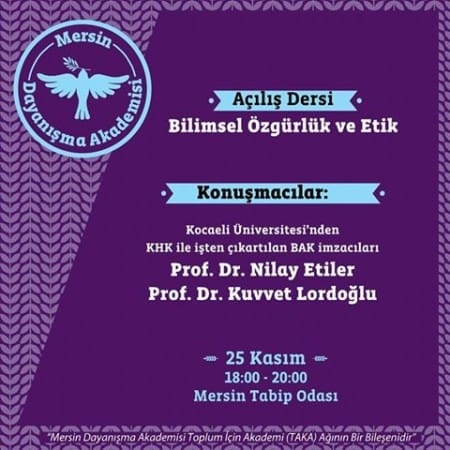 [The Mersin Academy for Solidarity has been established. Dismissed academics carried out their first lecture on the 25th of November, with the title “Scientific Freedom and Ethics”.]

In some cities of Turkey, informal institutions or academies where dismissed academics give lectures have been established as well. The first experiment of free academy, Kocaeli Academy for Solidarity, was established by 19 dismissed academics in Kocaeli. They claim that “science does not need any closed door or walls. Science does not obey”. Now there are other three academies which have been established in Izmir, Dersim, and Mersin. 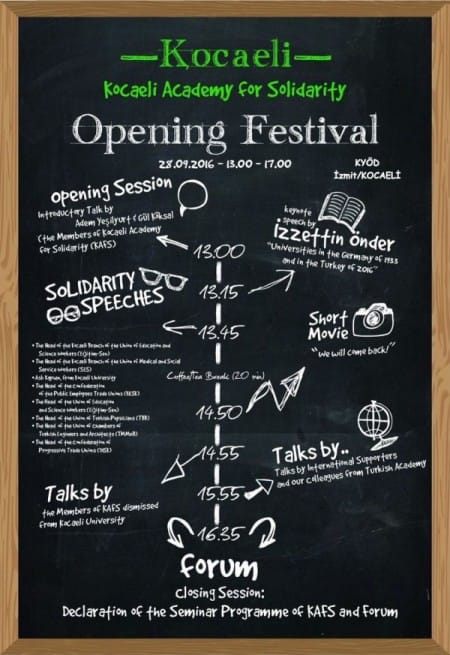 [The first Academy for Solidarity (Dayanışma Akademisi) was founded in Kocaeli.] 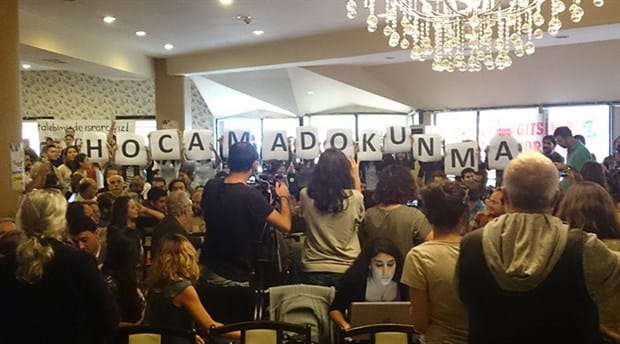 [“Do Not Touch My Professor”: the inauguration of Kocaeli Academy for Solidarity]

Furthermore, the Street Academy(Sokak Academisi) has been founded in Ankara by dismissed academics. The first lesson which was held there was about “Hegemony and Counter-Hegemony”.

The AKP government desires to silence all oppositions, to occupy and close all arenas for struggle, but it also triggers the emergence of resilient forms of opposition, urging intellectuals and academics to rebel to repressive policies and to find new spaces to continue to breathe. The Academics for Peace justify once more Marx’s 11th thesis, “Philosophers have hitherto only interpreted the world in various ways; the point is to change it.”

Although a lot has been said about the Islamic State (IS) since its proclamation in 2014, very little is known about the terrorist group’s internal dynamics. In spite of ⋙ 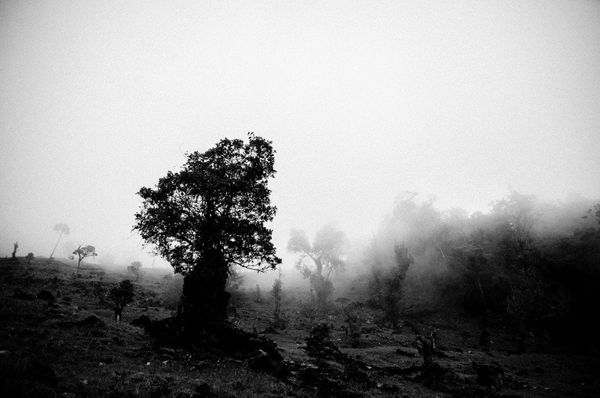 How to dash hopes that civil wars can be ended with honor and rehabilitation. After negotiating a comprehensive peace agreement with the FARC-EP guerrillas and signing in on September 26th, ⋙