What’s the imperial myth? It’s the mythological narration of a past that becomes the foundation of national identity, indicates, and legitimises the sphere of influence where the empire exercises its hegemony and fulfils its destiny. Russia is no exception.

According to its official ideology – as far as we can reconstruct it – Russia needs to control its historical sphere of influence that is geopolitically represented by those buffer states that are surrounding and protecting its borders from a potential enemy. The construction of the myth is rooted in imperial Russia, and combines, first, historical characteristics (the narratives proposing Russia as the defender of Europe from Mongol expansion, the bulwark against Bonapartist expansionism and the liberator from Hitler's grasp); second religious characteristics (Orthodox Christian religion chosen by Prince Vladimir I, conservative and traditionalist, linked to the genesis of the Russian myth and acts as a perpetual link with traditional values) and third; ideological characteristics (a pan-Slavic vision in which all Slavic peoples are unified under the protection of Russia).

Alterity to the West was a necessary component of the original identity construction. However, Russia has interacted for centuries with West and has been thus influenced (e.g., Peter the Great's West-inspired reforms and the adoption of Marxist philosophy in Soviet Russia). This contributed to the development of the complex narrative of a power that feels Caucasian and Western but must distinguish itself from it. The encirclement syndrome is also the result of this contradiction. Extending towards Europe, Russia is afraid of blurring into it. Continuity with the great imperial power and revanche from Soviet collapse are then used as an internal cohesive force and they nourish the Russian population much more than the – stunted – rhetoric of economic modernisation. In other words, living only of the status of great power, Russia manages to maintain its authenticity without being attracted by the temptation of Western prosperity.

But the myth of the new Russia is contradictory. The claim to be a global superpower clashes against the material inability to fulfil it and the lack of a universalistic ideology (as communism was). If the ambition is the recognition of the status of superpower (and not regional power as Obama defined it) Russia lacks the fundamental characteristics, namely "enough military, political and economic power to persuade nations in every region of the world to take actions they would not otherwise take”1. Indeed, Moscow overestimates its posture, but it is lucid enough to recognise its dramatic military inferiority compared to NATO (in 2020, the US alone allocated $ 778 bn in defence expenditure, while Russia spent $ 61.7 bn), and thus, over the last decade it has revised its strategy by theorising and using hybrid interventions. In other words, assuming that a nuclear war is not conceivable, Russia has nonetheless looked for ways to become (again) a superpower with limited means.

It is the Russians who theorized a kind of "hybrid" warfare which basically consists of two phases: non-kinetic and kinetic. The non-kinetic phase is preparatory and is implemented through corruption, propaganda, sabotage, manipulation, information warfare, economic and energy pressures (e.g., embargoes). The kinetic phase, i.e. military action, is very precise, limited, non-linear, disruptive and destructive. In Ukraine, this approach seems to have been adopted, but not successfully. Since EuroMaidan (the revolution that led to the expulsion of the pro-Russian Yanukovich government in 2014), Russian actions have been both non-kinetic and kinetic, the latter being especially deployed in Crimea (with the little green men) and Donbass. This phase, which embraces the last eight years, was intended to undermine the population's confidence in democratic institutions and strengthen pro-Russian forces. Instead of driving the country back into Russia's sphere of influence, it proved counterproductive as it fuelled fears of losing democratic achievements and reinforced anti-Russian nationalism. The most blatant results were the inclusion in the constitution of the will to join NATO and the EU in 2019, and the downgrading of Russian to a foreign language.

Having failed with the hybrid approach, Putin upped the ante. The movement of troops and armaments on the borders was intended to threaten an actual invasion in order to obtain satisfaction of his demands (demilitarisation and neutrality of Ukraine, recognition of the annexation of Crimea, independent Donbass republics). The demands were so maximalist as to be inadmissible, at least in their entirety. What’s interesting, the move took away the surprise effect and gave Ukraine the chance to supply itself with armaments and intelligence, and prepare for resistance. Now, we face a large-scale attack that contradicted the hybrid warfare doctrine. To find the rationale in Russian actions, we need to look at the context. The erosion of its sphere of influence by NATO expansion, combined with the coloured revolutions in Georgia in 2003, in Ukraine in 2004 and in Kyrgyzstan in 2005 (which have been interpreted in Moscow - rightly or wrongly - as hybrid US operations to draw satellite countries away from Russia and push them westward), has risen to the level of being intolerable for Moscow.

Ukraine is vital both strategically, because it protects the Russian borders in a completely flat and therefore vulnerable territory, and ideologically, because it is the heart of the ancient Rus’, the territory identified by the myth as the primary nucleus of the Russian state. Its loss is therefore not an option and when all other alternatives have failed, all that remains is to advance manu militari. From this perspective, Putin’s actions seem both clearer and more dramatic. Yet, dystopia has fogged the Kremlin’s vision. Moscow has made three fundamental but mistaken assumptions: its own strategic-military strength, the weakness of the West and the weakness of Ukraine. Military operations on the ground are more difficult for Russia than expected, and penetration into the country is slow and costly. A poorly prepared attack, lack of horizontal and vertical coordination, logistical difficulties, communication problems and the use of unprepared conscripts are keeping Russian troops bogged down on the Ukrainian lowlands. The second misjudgement was the belief that the reactions of a weak and disunited West could not seriously challenge the Russian economy prepared to resist sanctions. Diversifying trade partners by opening up to Asia, keeping the public debt at a very low level, and increasing stocks of gold and foreign exchange reserves were instrumental in dealing with a war economy, but they had not foreseen the scale of the Western reaction. The level of sanctions seems to be able to bend the Russian economy – which already seems to be on the brink of default. Large Western multinationals – among them, McDonalds and Coca-Cola – have already chosen to leave Russia, while European governments are planning to change their energy supply policies to achieve independence from Russia as a long-term strategy. Years of hybrid operations conducted by Russia in Europe and in the US through propaganda, fake news, cyber-attacks, and funding extreme right-wing parties, have not been enough to create the irreconcilable rifts that should have paralysed a joint European action (at least on the short term). But above all, Moscow dramatically underestimated the Ukrainian resistance: the ambition to rebuild the empire was so self-referential that it blatantly refused to see what scholars call agency, that is, the capacity and will to act of the actor considered. In the case of Ukraine, the existence of its own identity, self-determination, of being a political subject and not an object.

Expectations of an almost immediate capitulation have thus been tragically disregarded. Now we are witnessing continuous shifts in Russian war tactics: from full-scale invasion, to stalemate, to the concentration on the southern corridor from the Donbass to Odessa, to attacks in the west of the country and on civilian targets. Operations that expose how dystopia has prevented a decent assessment of the post-Crimea Ukrainian military reorganisation (trained and equipped by NATO), and thus a proper preparation of a campaign incomparably more demanding than previous ones, from Chechnya to Syria.

However it goes, a prolonged war will exhaust all sides, producing a dystopian future. Russia will find itself increasingly encircled and isolated, diplomatically ostracised, economically destroyed, and dependent on China. Europe will see its internal contradictions explode, such as the management of refugees, the issue of energy supplies, the severe economic repercussions of sanctions, and its future geopolitical posture. Ukraine, torn apart by a war raging in the streets of its cities, will at some point have to make an existential consideration: geographical redefinition and/or neutrality to stop the bombs. Over the last twenty years, Putin has wanted to rebuild imperial prestige, inebriated by the past. Utopia (i.e., the myth) has been nourished by propaganda and the crushing of internal opposition, turning into dystopia. And now he is caught between the narrative of the de-Nazification of Ukraine that prevents any solution below the level of the removal of the government, and the narrative of Russia and Ukraine as one people that becomes more and more difficult to sustain as the bombs increasingly target civilians. At this point, even if Moscow gains important territories in the south and east, and/or Ukraine's neutrality, it could turn out to be a Pyrrhic victory, because on the one hand the country would not be pacified and maintaining it, in the long run, would be a much bigger challenge; on the other hand the Kremlin has already turned Russia into an international pariah. 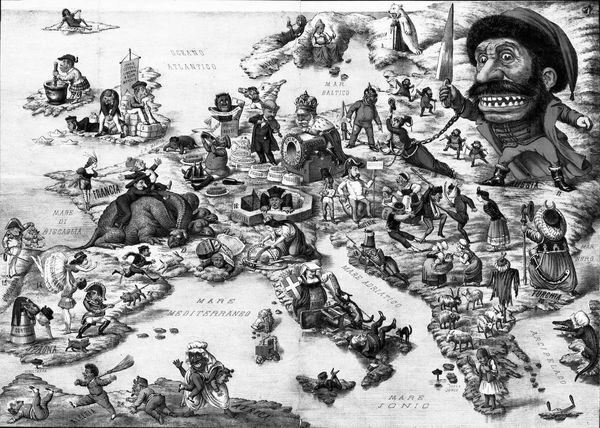 by Antonina Kseinova, Federica Pizzo, Felix Jahn. The Sant’Anna School of Advanced Studies (SSSA) and the Italian Standing Group of International Relations (SGRI) welcomed the new year with the ⋙