“I’m making pancakes, and there’s Nutella, come up in a bit”

“oi … you have my back dont snake it”

These tweets, which may look as a normal chat between girls using the typical teenagers’ slang, are, on the contrary, a conversation between some “Jihadi Brides”, the women that joined the Islamic State in Iraq and Syria. As it is widely known, many of the muhajirat – the Arabic term they use to refer to themselves (meaning the ones who have undertaken the Hijrah, the sacred Muslim pilgrimage) – make an intensive use of social networks like Twitter, Facebook, Blogspot and so on. Their online activity is usually aimed at describing the Islamic State from within and revolve around the blogging about life as married women in the Caliphate and the sharing of pictures of – violent – events taking place within it. Nevertheless, some of the pictures posted are different and show IS terrorists sharing some Pringles crisps or Snickers snacks bars with their jihadists friends, kittens, and “proclamations of love” for jars of Nutella. This, considered the “terrorist” nature of the group, is at least a bit surprising – not to say weird – and one may feel entitled to ask why men and women, who belong to a terrorist group, would mix posts dedicated to, for example, Nutella with other ones containing pictures of their lethal attacks, blending together bloody violence and chocolate spreadable cream.

Many are the explanations to these posts, apart from these men and women having a Western background. In the first place, these women (men also do it but to a lower extent) are the ones mainly in charge of the important task of online radicalization and recruitment of new members that will join ISIS, especially other women. Through these posts, thus, what they are trying to do is to depict the world within the Islamic State not as a war-zone, but as a “normal” place. This because, although Nutella is presented as the typical snack of the jihadists, the reality of the IS controlled territory (as the rest of Syria and Iraq) is one of destruction, wreaking of infrastructures, constant losses of electricity and scarcity of water. All these, summed to the danger of living in what is actually a war zone, with a constant threat of airstrikes. Clearly, this is not a world that can be described when trying to recruit new members for the group. Therefore, without arguing, as it has been done in the Western media, that new foreign fighters – both men and women – have been “lured” to join ISIS through these pictures of kittens and Nutella, the centrality of these elements has to be recognized since they serve a very important function within the group: the creation of “normality” and the idea that the same life – only better because integrated with *sharia *–, can be carried out within the Islamic State. These posts thus help to mask how the reality of living within the IS’ territories is and help to recruit new – above all, female – members who can identify with these young women and their – presented – life-style. 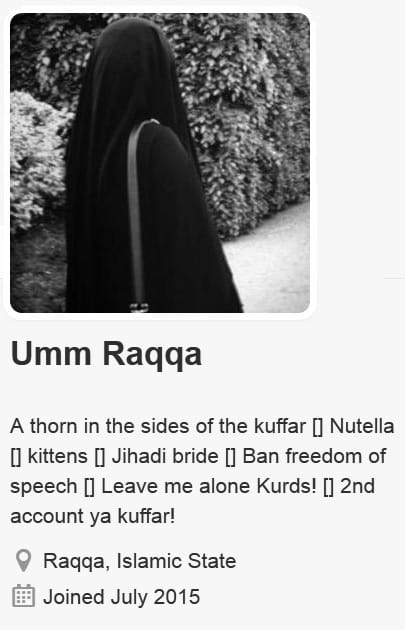 Nevertheless, the online radicalization and recruitment are not the only things women are responsible for within the Islamic State. As a matter of fact, apart from being sometimes allowed to work as doctors and teachers or to join the all-female brigades such as Al-Khansaa, the most important role they are assigned is the one of mothers. However, it is important not to interpret the IS’ stress on motherhood only from a Western Neo-orientalist position as this is not just something that derives from the group’s instrumentalization of certain Islamic traditions. What is seen as a religious detail is, in fact, one of the main pillars of the terrorist organization. This because, although the focus when analyzing the Islamic State usually falls on the brutal and lethal violence jihadists make use of, it has not to be forgotten that this is not only a terrorist group that managed to hold control of a territory, but it is a project of creation of a – maybe Utopian – society. And it is in this wider vision that women play a fundamental role, maybe even more important than the one of men. As a matter of fact, what the Western media mainly failed to see is that women are essential within the organization, not as Brides of the Jihadists but as procreators and mothers of the future generations of terrorists. The priority of the IS in attracting female members depends thus on the group’s envisaged future of the constitution of a – legitimate – Islamic Caliphate. And there is no possible nation building process without the presence of women and new generations of fighters born and raised within the same Caliphate that, not only will continue the fight, but that will have never experienced any other model of society, giving thus an internal legitimacy to the IS. Therefore, the role of women is fundamental since, without them, it would not be possible to create a new Utopian society from scratch.

Although Western media and analysts usually fail to focus on this, women jihadists seem to be conscious of their role and its importance. And this can be observed in the words they post online in their social media. For example, the jihadist known online as Bird of Jannah, who became famous for holding a blog called Diary of a Muhajirah, stated that as a woman “you want to produce a generation that can continue the jihad”. Furthermore, she argued that “Women are not equal to men. It can never be. Men are the leaders & women are [so] special that Allah has given them entire chapter in the Qur’an”. Moreover, the role of women as mothers within the domestic sphere is also specified and religiously justified in the document produced by one of the group’s all-female brigades: *Women of the Islamic State. A Manifesto on Women by the Al-Khanssaa Brigade. *Here, it can be read that the one as mothers is “women’s fundamental role and rightful place. It is the harmonious way for her to live and interact amidst her sons and her people, to bring up and educate, protect and care for the next generation to come” since “the greatness of her position, the purpose of her existence is the Divine duty of motherhood”.

The presence of women is thus of extreme importance because it offers stability, helps to ascribe gender roles to individuals in the society and legitimizes the nation-building process. Furthermore, the presence of women and, thanks to it, of families and children brings “normality” to this “Utopian society” – which also translates in more legitimacy – . Therefore, we can go back to the “Nutella” narrative and the kitten posts. Although this may not be their main function, these are also used to create a sense of normality directed not only to people outside the ISIS but also to the ones belonging to the group. As a matter of fact, it is fundamental to spread the illusion even among the same jihadists that they are living in a “conventional” society, a characteristic that also reinforces the legitimacy of the Caliphate. In this sense, it is not only a certain “recruitable” audience but also the group itself that wants to see and have a certain feeling of “normality” and, therefore, these posts become also an exercise of self-conviction or, at least, of self-creation of normality. This because a society – or the embryo of it – needs the construction and the presence of “normal”, routinary moments and ordinary people – as it can be a group of jihadists laughing and having dinner or women walking and shopping together –. This need is given not only by the necessity to recruit more individuals, but also by the fact that its members want to feel that the project is working, something that drives through living – and then posting about – “normal” moments and enjoy ordinary commodities, something both the outside and inside the Caliphate audience will feel familiar and comfortable with: men cheerily jumping in a pool, women falling in love with their jihadi husbands, terrorists drinking tea together, women chatting and posting about cute kittens and Nutella pancakes. Normal moments that are captured and posted online, because even the most lethal and bloody group cannot found a society only on violence.

Migrants' (pre)occupations and the racialised approach adopted all along the Central Mediterranean Route. While Italy has become one of the main access gate to Europe, a large part of ⋙

Comparing vintage Hollywood myth-making with contemporary narratives on Islam. Let’s start with a little quiz for the analysts of jihad and radicalisation among our select readership. Where is this ⋙